It is unlikely that many people are disappointed to see 2002 go into the history books. 2002 marked the third time in a CENTURY that the markets declined three years in a row. Only 1929-1932 and 1939-1941 provided the same kind of multi-year debacle. Let’s put that in perspective. The 1929-1932 bear market was the result of the great depression, a period marked by chaos in our financial system and massive unemployment. The 1939-1941 bear market was a result of the worldwide chaos caused by Hitler and World War II.

No one would disagree that the world is not as safe as it was before September 11th, and no one would make a claim that our economy is as robust as it was in 1999. That said, it may still be hard for some to see why the markets have declined in such a dramatic fashion. The answer is simple, yet deadly. When stock prices are overvalued as they were in 1999-2000, the combination of declining earnings and declining valuations accelerates the drop in prices. When you had a company trading at 100x its $1 per share earnings forecast, it was a $100 stock. If the company’s earnings drop to $.50 cents per share and the multiple drops to 20x, then you have a stock that has dropped from $100 per share to $10 per share. This 90% loss is much larger than the 50% drop that one might expect to occur. Many would expect the stock price to move in lock step with the earnings of the company, and normally, over time, this is the case. However, when valuations reach extreme levels, the moves can be magnified.

We expect that the opposite effect, rising earnings and expanding valuations, is a strong possibility for many of the companies we own. One example of this would be a recent portfolio addition, General Dynamics (NYSE:GD). This company is a leader in both the defense and commercial airline businesses. The stock is currently trading around $65 per share and the company earned $5.07 per share in the last 12 months. This gives the stock a multiple of 12.82x. We believe that GD will earn at least $5.60 in 2004, an increase of 10.45% and pay a dividend of at least 1.8%. If the valuation stays exactly the same and the stock simply moves up with the earnings increase, we will make a return of 12.25%, including dividends. This is what we see as our base case in the company. We are confident that as the economy turns, their commercial airline business will improve quickly. We also see GD as being in the sweet spot of a rising national defense budget. These two factors, as well as the fact that they have one of the best management teams in the country, could allow the company to increase earnings to more than $6.00 per share in 2005. We believe they may be able to grow earnings by approximately 15% a year for the next 5 years. It is our opinion that the market will put a multiple of at least 18x earnings on the company stock price. That gives us a target of $108 by the end of 2005, which would represent a total return of approximately 70% in 2-3 years, including dividends. GD’s stock traded as high as $111 per share in June of this year and we view the pullback as a very attractive entry point for this great company. This potential double benefit of rising earnings and multiple expansion exists throughout our portfolio of companies. 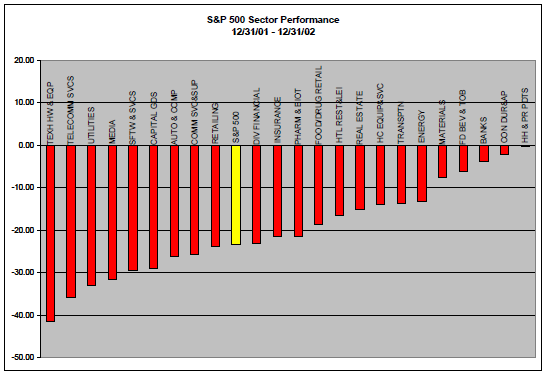 What will this year bring? As you know, we do not try to predict the markets direction, but focus our efforts on buying great companies at reasonable prices. One statistic that surprises a lot of people is the total return of the S&P 500 for the last 10 years. Everyone is focused on how bad the market was from 2000-2002, and it was. But, for the last 10 years, stocks were still the best performing asset class, in spite of the last three years. For the 10-year period ending 12/31/2002, the S&P 500 retuned more than 9% compounded annually. This is approximately the same return that the market has historically generated for the last 100 years. When you look at this return in comparison to inflation, which was less than 4% for the period, it is extremely attractive. If one can grow their assets at a real rate of return (after inflation) of 5% per year, wealth grows very quickly. We are comfortable that the excesses have been extracted from the market and the next decade will deliver much the same rate of return.

We are pleased with our relative performance in 2002. We decisively beat our benchmarks and outperformed the vast majority of our peers. As many of you have heard us say, “you can’t eat relative performance,” and so we look forward with great anticipation to a much better market environment in 2003. We believe the next several years will be very rewarding to patient, long-term investors. Please let us know what we can do to serve you better. Thank you for the confidence that you have placed in CAZ Investments.