Well after watching paint dry for the 2nd and 3rd Quarters, the markets finally woke up. The uncertainty caused by the geo-political factors, primarily the Presidential election, created an incredibly stagnant market environment for most of 2004. Fortunately, once some of the uncertainty was removed, the markets responded by posting a strong rally in the 4th Quarter. There can be no question that one of the greatest enemies of the stock market is “not knowing.” In this case what mattered to the market was that we elected a President, without a debacle like 2000. Not only did the people elect a President, but he was elected with both a popular vote majority and an Electoral College victory. While some market participants wanted one candidate over the other, what they all wanted was a clear winner.

The response to this was a very sharp rally in all of the major stock indices. The S & P 500 index rallied by more than 9% and the Russell 1000 Growth index gained almost 9%. This resulted in a gain for 2004 of approximately 10.8% for the S & P and just over 5% from the Russell 1000 Growth. We are very pleased to report that all of our portfolios had very good absolute and relative performance. The Cornerstone Portfolio increased by approximately 11% and The Concentrated Cornerstone Portfolio grew by more than 17%. Our strong performance was a result of very good stock selection. We are very pleased with the way that our companies businesses performed for the year and that strong operating performance was reflected in their stock price.

One of the things that surprised people was how little volatility there was in 2004. Certainly some stocks may have moved around a bit, but the overall market experienced VERY low volatility by historical standards. The 2004 stock market was one of the least volatile in the last 40 years. The good news about this is that there was not the kind of wild gyrations that we have grown to expect. Therefore the market was fairly reflective of the performance of the underlying business that it represents. It is well known that last December we thought that our companies would grow cash flow by approximately 15% in 2004 and that we felt there was 5 – 7% risk to valuations. As a result we felt that market could potentially return between 8 and 10%. As it turned out, those numbers were fairly close to what happened. The results of the market were very solid for the year and were extremely favorable when compared to the rate of inflation and other possible investment vehicles such as bonds and cash.

But all of that is history. What about the future? What can we expect from 2005? There are a number of very important factors that affect stock prices and we will touch on only a few that we believe will be the key drivers. We will always stay focused on company specific fundamentals as our primary decision making tool, but we will discuss some of the factors that we consider with regard to our assumptions on valuations. 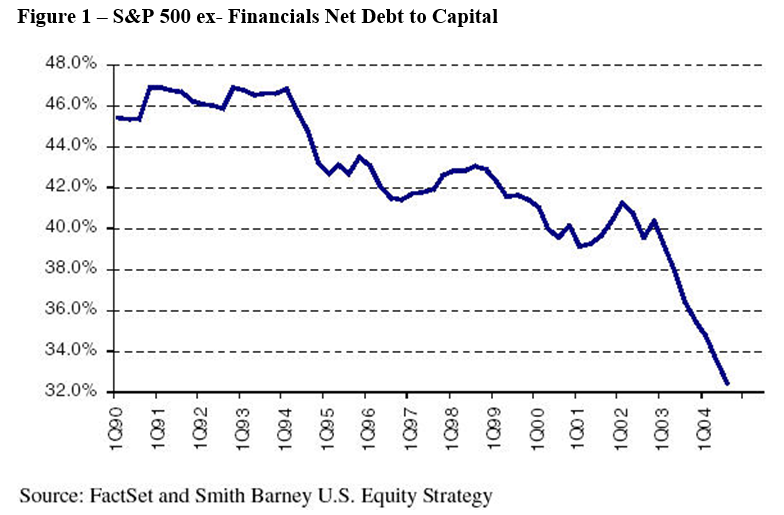 That is a natural lead in to what we expect for 2005. As most people know, we totally despise giving predictions as to what the broad market will do. Reporters always ask and so we must therefore be prepared to answer. We always provide our answer based on what we expect from our portfolio companies. Based on what you read above, we expect reasonable profit growth with a slight decline in valuations. All of that adds up to moderate, but positive, expectations. We believe our companies will grow cash flow by approximately 12% this year, and that valuations may decline by 5 – 7%. This would give us a return expectation in our portfolio of 5 – 7% plus dividends. The greatest variable we see in that forecast is valuation risk. We have a high level of confidence that our companies will achieve the 12% cash flow growth, but we can build strong cases that valuations may decline by as much as 10% or actually increase, based on privatization of Social Security etc. Naturally, we hope that the markets will yield greater returns and that companies will grow by larger amounts, but based on what we know today, we are comfortable with these numbers.

As you can see from Chart 2 below, the Relative Dividend Yield of the 25 largest companies in the S & P 500 is at the highest level it has been in more than 20 years. 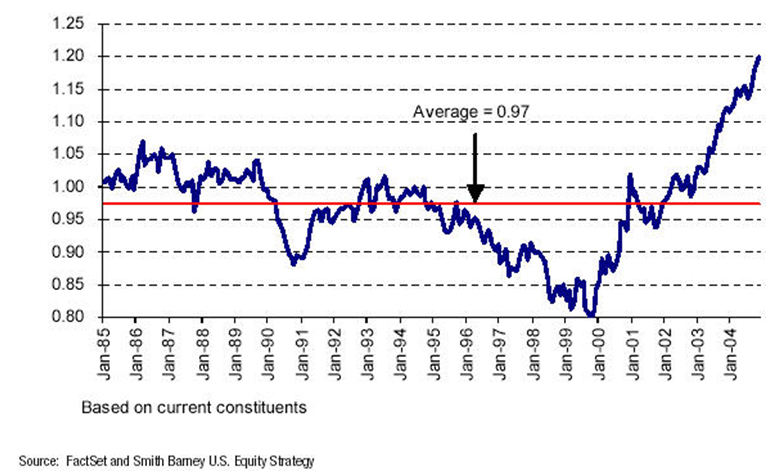 The same extreme reading is evident in the Relative P/E ratio that is illustrated in Chart 3. 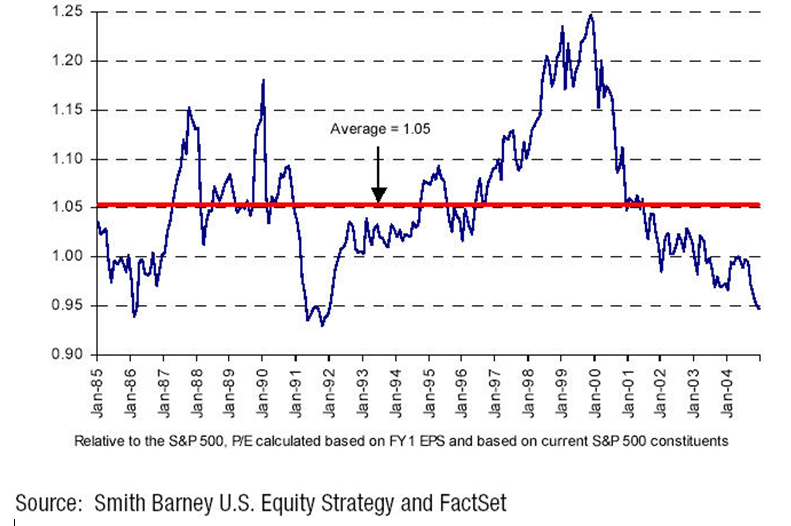 These observations are very interesting to us. Obviously, as a Large Cap manager, we are excited to see our universe of stocks at more reasonable valuations that other areas of the markets. We believe this will allow us to be continue to be able to find excellent ideas in our universe that will allow us to earn solid returns for our investors.

We are excited about what 2005 is going to bring. Please let us know what we can do to serve you better.