Volatility Returned…but not for long!

For the second time in 10 months the market took investors on a painful ride that reminded investors of risk. This ride was not fun, but it was short lived. From the market’s high on February 22ndthru its low on March 5th, the S&P 500 declined by 6.7%. That two week decline is not among the worst historical market declines, but it certainly was not pleasant. Interestingly there were hundreds of theories as to why the market declined that much so quickly. There was no specific reason, but a few factors caused a nervous tone to be sent thru the market that allowed a vacuum to develop in the supply/demand picture, which caused the quick decline.

The fascinating end to this tale of market movement is that the market bounced back rather quickly and ended the quarter slightly higher for the year. As we write this on April 5th, the market is only down 1.2% from the high for the year. In other words the market shook off the decline and the news that caused it, and now behaves as though all of those factors are behind us. This is where the real story will likely be told over the next year.

Risk is still not getting any respect

In spite of the sharp decline we still see a level of complacency in the market that is very surprising. We have talked about how the market has been ignoring the possibility of bad events for more than a year now. We have had two “wake up calls” yet the “sleeping giant” remains asleep. He may have rolled over and hit the snooze button, but he is still asleep. Who, or what, is this “sleeping giant”? Volatility is his name and he is going to get out of bed sooner or later and create some havoc (he always does).

Why does volatility matter? Aside from the obvious answer that volatility creates uneasiness in the minds of investors, who watch their asset values fluctuate, volatility creates a great strain on anyone who is “pushing the envelope” by taking higher levels of risk. In particular, volatility can create enormous problems for investors using heavy doses of leverage in their strategy. During this sharp decline we did not see people selling because they HAD to sell rather than because they wanted to sell. If one thinks about that for a minute, it should cause you to shudder just a bit. The markets dropped by more than 500 points in a day, and mass liquidations were not taking place. Imagine if we had seen distressed sellers, who had to sell, regardless of price…….

Surely people took the warning shot and changed their positions to be more defensive, right? Certainly investors reassessed the risk they have in their portfolios and reduced any leverage that might exist, right? Unfortunately, there is not much evidence that risk has been priced back into the markets in a meaningful way. Just a few points of reference:

As we have discussed several times, the riskier the asset the more expensive its valuation seems to be, which is contrary to every bit of economic logic. This is true in almost all asset classes, but no where is it more apparent than in the fixed income markets. The chart below has not been updated with the 1st quarter numbers yet, but the picture has not changed much. We have added this chart because it gives an excellent perspective as to how the risk profile of the market has changed: 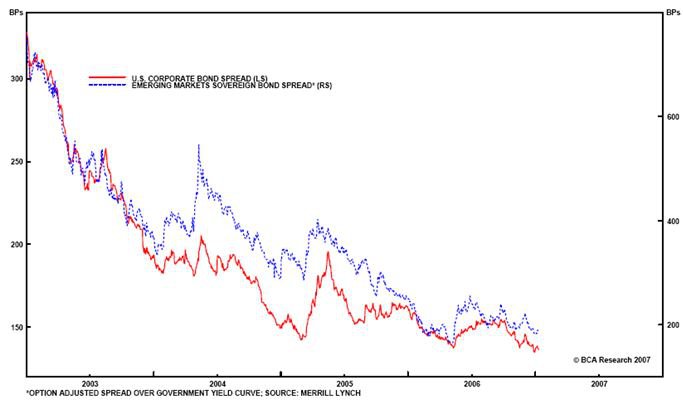 This spread chart shows the premium you can receive for investing in bonds issued by U.S. Corporations and the Government obligations of countries that are considered Emerging Markets. The larger the spread, the more return that investors are demanding to be paid for the risk they are taking. The smaller the spread, the less return investors require for that risk.

As you can see, spreads have declined dramatically since the middle of 2002. This is logical considering the world’s weak economic state in 2002, and growth has been prevalent since then. However, notice how small the spreads are now. In 2002 the market demanded nearly a 7% premium above a U.S. Treasury to compensate them for the risk of investing in Emerging Markets debt. Today the market only requires approximately a 2% premium for that risk. Would you be willing to accept only a 2% higher yield for investing in bonds issued by countries in the Emerging Markets?

As sure as the sun will rise in the East tomorrow, the market will re-price the risk premium required for this type of fixed income investment. There will be a day, and of course no one knows when it will occur, when those same spreads are 3%, 4%, or even higher. This will occur when the markets realize that risk deserves respect and investors demand to be paid more for the risk being taken.

The other area where this complacency is incredibly prevalent is in the valuations of quality stocks compared to low quality stocks. We have discussed this several times in the last year or so, and it is just as true today as it was then. As such, we will not spend much time on it, but the chart below really tells the story. 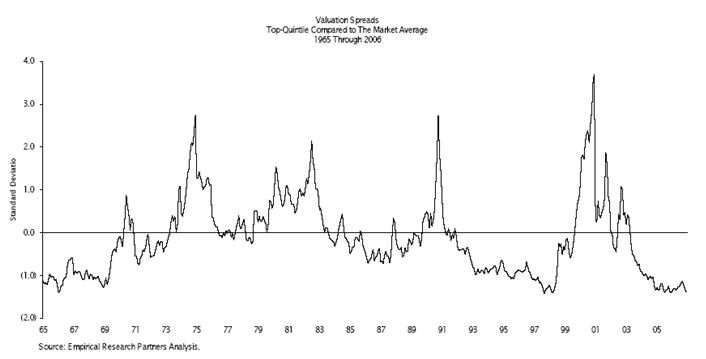 As you can see in the chart, top quintile companies based on financial strength are trading at the lowest valuation level when compared to the average stock in nearly 40 years! The chart clearly shows how quality has dramatically been revalued after each of the prior periods. Again, the timing is the hard part, but it is certain.

We feel that we are positioned very well to take advantage of the market returning to quality stocks. This is our focus area and we should be well rewarded for our exposure to high quality growth businesses.

The Sub-Prime mess is just getting started

Space dictates that we keep this section short so we will not elaborate on this topic. What we will say is that the sub-prime mortgage debacle is in the 2nd inning of a 9 inning game. There has been practically no discipline in the lending to sub – prime borrowers (called sub-prime because the borrower has below average credit) over the last few years, and it is going to be a painful unwind. (Remember the discussion of risk above? The sub-prime lending standards are another incredible example.)

Many of the borrowers who received sub-prime mortgages are going to be woefully surprised with what faces them over the next couple of years. Most of these borrowers have little, if any, equity in their home. A huge percentage of them have adjustable rate mortgages (ARM’s) that are going to reset and cause mortgage payments to double in many cases. The borrowers are going to find that the lenders, who have been willing to make these risky loans, will not be in business and traditional lenders have tightened their lending standards. Also, the borrowers are going to find their home values have not increased every month, as was the case for several years, and possibly their home is not worth what they paid for it. If they can’t sell the home because they have no equity and if they can’t afford the new higher mortgage payment required by the ARM, what are they going to do? If one thinks about the outcome from this scenario, it is not pretty. Is this going to happen? One only has to look at the news and see that it already is. The key is that it is going to get much worse for those borrowers before it gets better.

What to watch for

We are NOT bearish but it goes without saying that we are still very cautious. We thought the correction that started in February would wash out the complacency and get stock values to attractive levels as people begin to respect risk. For about two weeks that certainly looked like it was going to happen. Unfortunately, the snap back has been very quick and the same complacency appears to still be prevalent. A further correction would be very helpful. Obviously a market decline would not be pleasant, but just like exercising is not necessarily pleasant it makes us healthier. Corrections work the same way in that they allow the rallies to be longer and more sustainable.

What do we need to carefully watch for over the next three months? Number one as always, but especially now, is corporate profits. We will start to hear 1st quarter company reports next week. While the actual results from the first three months of 2007 will be important, the real mover will be the guidance that companies provide for the rest of the year. Everyone will be listening closely to see if companies talk about a slowdown in their markets from the weakness in the economy. Executive commentary will drive market direction.

Some analysts have started to ratchet down their earnings growth assumptions for 2007. To refresh your memory we stated in our last letter that we were looking for 9-10% cash flow growth this year for our companies. That was slightly less than what most analysts were saying for the overall market. Now most analysts are predicting approximately 7% and we have seen several firms trim their forecast to only 5% earnings growth in the market for the year. In spite of these falling estimates, the market is still higher. This means that if the lower growth assumptions turn out to be correct the market could begin the corrective phase we discussed above.

Next we will be watching the mortgage market debacle for signs that the consumer is slowing down their rate of spending. So far, it has not been the case, but if the defaults become more prevalent and begin to move into the traditional mortgage space it could become a problem. The more likely scenario, and one that does have our close attention, is slower spending, because people are not able to refinance over and over and draw cash out of their homes. The U.S. consumer has been using their homes as a “piggy bank” for the last several years and if that fountain of cash is turned off, those consumers may not be able to spend at the same level.

We will also closely monitor the global liquidity trends, which would include the yen-carry trade. There is no way to describe this process in detail in this letter. Suffice it to say if the carry trade begins to be reversed it is going to put a massive crimp on the liquidity in the marketplace.

The final critical piece to the picture is the Federal Reserve. We still believe the Fed will lower interest rates by mid summer. The question will be whether they are lowering interest rates as a precautionary measure or, because they must. The economy’s rate of decent is going to be vital to corporate profitability which takes us back to the first point in this section.

We are very excited to announce the client service initiative that we started almost a year ago is finally ready to go “live”. You now have 24/7 access to your account information, including tax data, transaction history, asset allocations and much more via our website, www.cazinvestments.com. This has been an exhaustive effort by many in our firm, but we would like to specifically thank Lindsay Henderson and Casey Hodges as they have been running “point” on the project. We are very proud of what they have built, and we know that you will derive great benefit from the service.

Please let us know if there is anything we can do for you.