The third quarter of 2008 brought two major storms into our lives, at least for those of us in the Gulf Coast region. We experienced one of the worst economic crises in the history of the United States, and Hurricane Ike blasted the Houston area. Through October 10, the US stock market had declined year to date more than any time in history. Governments around the world have thrust themselves into the financial markets in a nearly unprecedented fashion. The financial markets, and the companies that make up the financial sector, will be changed for generations.

It is hard to recap the month of September, much less the entire quarter, in a letter of this type, but we will remind readers of the major points:

This list is still not complete, but space necessitates we move on. Readers should get the point that this was an amazing 90 days, and these events will be the material that finance textbooks investigate for decades. No one has put an official label on it, but we will refer to it as the “Financial Meltdown of 2008.”

What Can We Learn From Ike?

Readers may say, “What in the world does Ike have to do with the “Financial Meltdown of 2008”? The reality is that we can learn a great deal about the financial markets from studying Ike. We are not talking about the storm itself, but the way people respond to crisis. The similarities will help us understand what has happened which, in turn, will help us better prepare for future financial “storms.”

In bullet form, let’s list the series of events that most people in the Houston area experienced with this storm:

So what does all of this have to do with the “Financial Meltdown of 2008”? While reading the list above, I am sure most people can see the psychological similarities between Hurricane Ike and the financial meltdown. I want to elaborate on these similarities, and the parallel way in which investors, institutions, and even governments experienced this financial “storm.”

The Cycle of a Financial Crisis

Most people will admit, if they are honest with themselves, that they knew the massive increase in housing prices was unsustainable. They knew that financing advertisements that promised you could actually borrow more money than the house was worth (allowing you to get paid cash for buying a house) was insane. People intuitively knew that when exotic financing (no money down, interest only, option arms, etc.) was created, and then given to borrowers that had lousy credit, it would be a bad idea in the long run. People were enjoying the peace and harmony, though, that came from an ever-rising home price. They enjoyed the ability to use their home as a “piggy bank” to make purchases whenever they wished. People were very comfortable with the thought that they did not have to worry about saving money because their home was going to continue to increase in value. To make matters worse, there were huge profits being made by nearly everyone involved in the housing markets. Those conflicts created blindness to the warning signs that a storm was coming.

After ignoring the initial signs, the next signs that emerge show the storm is on the horizon. Home prices start to peak, some mortgages begin to default, refinancing options begin to dry up, and people have to begin paying the higher rates on adjustable-rate loans (the rates they never expected to pay and can’t afford). Yet, the vast majority of participants rationalize that the “storm will turn and not affect our area.”

Shortly thereafter, it becomes clear that we are going to take a direct hit, and people start to “batten down the hatches.” People have no choice but to try and salvage their situation using any measure available. Then panic sets in. Extreme measures are taken that, to an impartial observer, make no sense whatsoever (think about the short-selling ban, etc.). Eventually the storm passes and people emerge to assess the damage.

This same cycle may be applied to every financial storm we have seen in history. This is true whether we look at the internet bubble of 1999, the credit bubble of the late 80’s, the oil bubble, the roaring twenties, or even the tulip mania in Holland. Human psychology does not change, and it is that psychology that allows these events to happen. Guess what? It won’t be any different in the future, and those that learn how to recognize and profit from this psychology will be the most successful investors in the long run.

Where the Similarities End

At some point the similarities between a natural disaster and a financial crisis definitely end. The natural storm will pass, and it is officially over. A financial crisis continues on with additional repercussions. It also creates opportunities for investors to take advantage of other people’s mistakes. The hardest part for investors is that there is no “weather man” that gives an all-clear signal. Any time you have panic and forced liquidations, though, there is opportunity. Does this mean that the worst is behind us and that the storm cannot linger? Or worse, do a 360 and come back to hit us again? Of course not, but in the financial markets there are a couple of absolutes that will always be true:

Where Do We Go From Here?

For nearly two years we have written in our letters that investors need to make certain that their asset allocations are in line with their risk tolerance. Naturally, we all think we know what that risk tolerance is, but we never know for sure until it is truly tested. We felt that it was critical for clients to be “fearful when everyone else was being greedy.” The world was not respecting risk, and this gave us great concern. For our clients that realigned according to those recommendations, they are substantially less invested in equities than their target asset allocation would indicate that they should be.

As we indicated in our email to clients before the opening on October 10, we felt like the market was putting in a near-term bottom. We felt that valuations were getting very attractive, and that the amount of fear and panic was unsustainable. We said investors should start rotating their asset allocations back to target. This was not a one day call, but a recommendation to gradually begin increasing exposure to higher risk/reward assets. Simply stated, we want to now be greedy as the rest of the world has become fearful.

Does this mean the market cannot go lower? Of course not! The hangover from nearly a decade of “easy money” and excessive debt levels for consumers and institutions will last longer than people think. We do not expect the housing market to bottom until mid-next year at the earliest. Corporate earnings will be under substantial pressure for at least the next several quarters. Lending standards will be tight for the next generation of commercial bankers. There is likely going to be a global recession that very few countries or industries will be able to avoid. When investors look at the other side of the economic trough, though, there will be substantial profits made from these levels. Never forget, the market is a “forward looking animal.” Much of the negative news listed above is already factored into prices as a result of the approximately 50% decline in worldwide stock prices. We are closer to the low than we are to the next high, so we should be allocating assets to take advantage of that opportunity.

To give everyone a bit of perspective, we are going to bring back a chart that we showed in 2002. The chart below illustrates the extreme levels below the “average” that markets reached on October 10. Again, this does not provide definitive evidence that we will go substantially higher, or the timing for when the rally will occur. What it does allow is for us to see the bigger picture and allow us to see the “forest and not just the trees.” 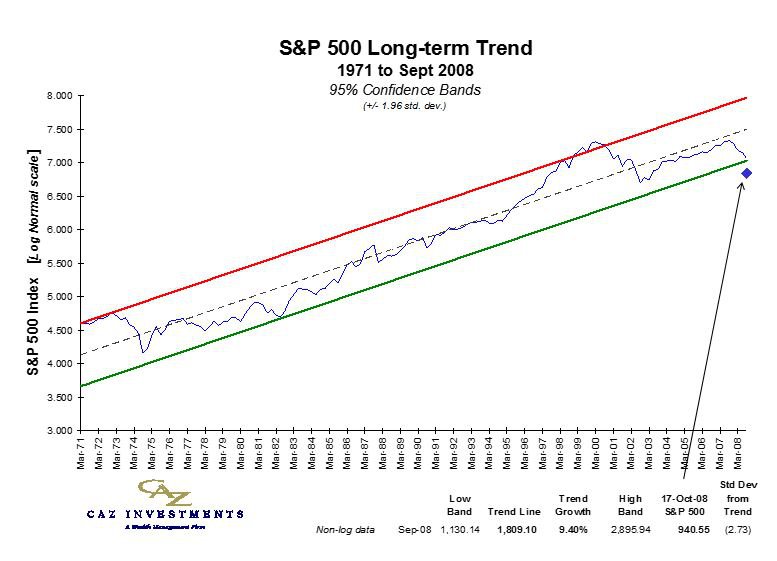 What Should We Learn From This Experience?

The first thing we should learn is that it is never “if” but “when” another financial storm will occur. It is critical that we make investment decisions with the least amount of emotion possible. In order to do this, we must decide what we are going to do BEFORE the extreme occurs. This is accomplished by having a clearly-defined game plan and then sticking to it. Forgive the football analogy, but it is that time of year. A coach must plan ahead how he is going to handle 4th and 10 on the 40-yard line with 90 seconds left in the game when he is trailing by 5 points, and his starting quarterback is hurt! If he waits until that situation arises to decide what he is going to do, when the fans are screaming and his team is looking to him for leadership, he probably will not make a good decision.

Investors must do the same. We must decide what our allocations are going to be, and put them in writing. Next, we must clearly define at what point we are going to reallocate the assets based on percentages that we are comfortable with and based on historical data. Finally, we need to have the discipline to stay the course. By doing this, we will have a road map to follow and not be subject to the emotions of fear and greed. Only by planning ahead can we think rationally about how our situation will be impacted by the storm. At this point, we can make good decisions that will help us protect our capital and provide us with profit opportunity. If we wait until the middle of the storm to prepare, it is too late. To put it another way (for clients in the Houston Gulf Coast region that went without electricity for 12 days): Buy the generator when you don’t need it!

One of the pleasant surprises amongst this turmoil has been the strength of our clients. The sophistication of this group has been very apparent, and we have been very impressed with the response of the group to this financial storm. Likewise, our organization is healthy and strong, and we feel like we are positioned extremely well for the future. Our team is available to answer any questions you may have. We appreciate the confidence you have in our firm.

All of our very best to you and your family.