The first quarter of 2009 picked up right where 2008 left off, with stock prices around the world dropping dramatically. The first two months of 2009 ranked among the worst stock market starts to a new year in history. People starting talking about the “end of capitalism,” and it actually felt like it for a few weeks. By the time we reached the market lows on March 6, the S&P 500 had dropped by more than 26% in less than 70 days! And that, of course, was on top of the 38% decline that was experienced in 2008. It was quite natural for people to have substantial angst about the viability of the stock market, and there was truly “panic” among investors that had not been seen in decades.

What happened over the next three weeks was quite astounding to many people. The market not only stopped going down, but we experienced one of the greatest rallies in history. From its March 6 low, the S&P 500 rallied 21% by the end of March. Since that time, the rally has continued, and as this letter is being written, the market has now increased by more than 29% in just over a month! What has perplexed many people is that there were no warning signs that the rally was coming, and candidly, the news flow has not been particularly good.

What were we thinking?

On the evening of March 2, 2009, we sent an email to every client of the firm. In this email we stated, “We are as bullish as we have been in 7 years and we are growing more convicted every day as the market continues to sell off.” We felt that we may have finally reached the “throwing in the towel” stage where the worst news was already discounted in the prices of assets. Obviously thus far, with the benefit of hindsight, it appears that we truly were at that “capitulation” stage as the market bottomed within 5% of that correspondence.

What gave us the conviction to put out that correspondence? To quote the March 2 email again:

Many people have heard me say that there have only been a few “no- brainer” situations that I have seen in my career. The first was that the financials were an incredible buying opportunity in 1991. The second was that the tech bubble would burst in 1999. The third was the buying opportunity in stocks in 2002. The fourth was that the housing bubble would burst. The fifth is undoubtedly today. Stocks will go considerably higher from $700 on the S&P 500 that we closed at today.

The hardest part about “no-brainers” is that they usually fly in the face of everything you hear and, more importantly, what you feel. Great investment returns come from thinking clearly when everyone else is losing their head. That is where we are today. Focus on the valuations. As sure as the sun will come up in the East tomorrow, the S&P 500 will trade at 9X cash flow at some point in the future. The only question is whether or not we will maximize the opportunity from that increase in value.”

Quite simply, the valuations in the markets had reached extreme levels. It was easy for us to believe that investors would be rewarded if they allocated capital at those valuations. Earlier in the email we had expounded on valuations and how the market was trading at 4.5X cash flow. That was a decline of 77% in valuations from the peak in valuations seen in early 2000. The world has a lot of issues right now, but those issues will be resolved and the markets will return to “normal.” When that occurs, valuations will be rational and stock prices will reflect the value of the underlying businesses. That is the nature of markets; to quote Benjamin Graham talking about the stock market, “In the short run it is a voting machine. In the long run it is a weighing machine.”

Our conviction was further supported by some long-term historical data that would lead one to believe that prices had indeed become attractive again. The first of those was the S&P 500 regression chart that we included in that email. It is reprinted below: 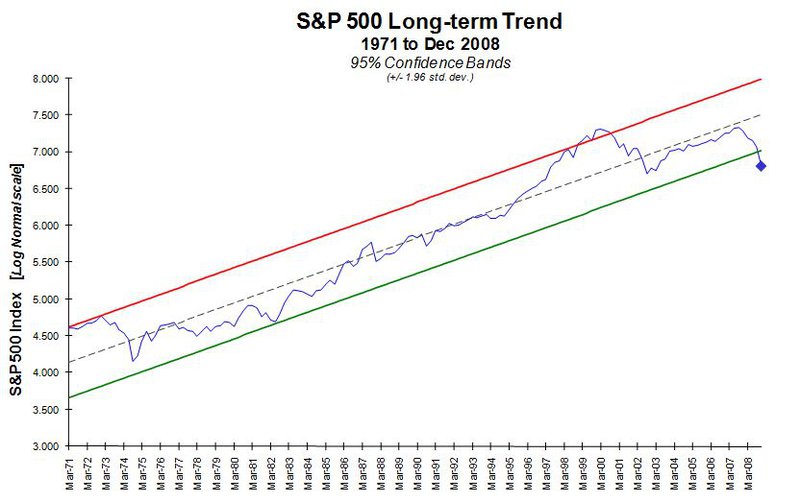 Another supporting factor that we did not delve into as part of our email was the total decline of stock values compared to the Gross National Product. As one can see from the chart below, the total market value of U.S. stocks as a percent of GNP had declined from 190% at the peak in March of 2000 to 75% in late January. From the date of that chart, January 23, the market declined another 20%, putting the ratio closer to historical lows.

None of this data is meant to suggest that prices could not have gone lower. Of course that was a possibility, but the evidence was clear to us that investors would be well served if they increased their exposure to stocks at those extreme levels.

The reality is that we have a great economy and we will survive this turmoil. It is hard to predict actually how, and when, the stability will return. When it does, companies will still make money and valuations will reflect those values.

One of the items that we love to read each year is Warren Buffett’s letter to shareholders. If you have not read it in its entirety, it is educational and entertaining. While no one is perfect all of the time, Mr. Buffett has clearly shown his ability to remove emotion from investment decisions. That trait is what we admire the most about the man, and that unemotional approach to investing is what we strive to achieve. We cannot reprint all 22 pages of his annual letter published February 27, but we did feel it would be appropriate to quote Mr. Buffett’s feelings regarding the current environment:

“Amid this bad news, however, never forget that our country has faced far worse travails in the past. In the 20th Century alone, we dealt with two great wars (one of which we initially appeared to be losing); a dozen or so panics and recessions; virulent inflation that led to a 21½% prime rate in 1980; and the Great Depression of the 1930s, when unemployment ranged between 15% and 25% for many years. America has had no shortage of challenges. Without fail, however, we’ve overcome them. In the face of those obstacles – and many others – the real standard of living for Americans improved nearly seven-fold during the 1900s, while the Dow Jones Industrials rose from 66 to 11,497. Compare the record of this period with the dozens of centuries during which humans secured only tiny gains, if any, in how they lived. Though the path has not been smooth, our economic system has worked extraordinarily well over time. It has unleashed human potential as no other system has, and it will continue to do so. America’s best days lie ahead.”

So where do we go from here?

The news has become markedly more benign, and one can actually feel that people are not really expecting capitalism to end anytime soon. This is what happens when markets rally—people start to feel better. Whether or not their feelings are justified will be determined by the future, but for now, the psychology of the market is trying to change. Investors are beginning to feel that “maybe” the worst is behind us and that things are going to get better.

Let us be very clear. Are we still bullish? Yes, we are still optimistic about the market. To give the appropriate caveat, though, when stock prices rally by 29% in a month, we certainly are less enthusiastic than we were. We are more excited when prices are cheap and less excited as they grow more expensive…call us old fashioned. But the overall outlook is certainly better, and we do expect the economy to recover toward the end of the year/early next year. As an anticipatory animal, the market will begin to factor that recovery into stock prices in advance of the actual turn.

Is it possible we retest the lows? Absolutely! So that there is no confusion, if a client cannot tolerate the risk in their portfolio if we were to go back to, and possibly lower than, the March lows, they should talk with us about how much risk they can tolerate. If the market does pull back materially, we would use that as a buying opportunity for those that may feel they have less exposure to stocks than they should.

New additions to the team

We are very pleased to announce that we have two new members of the CAZ team. Ann Bennett has joined us as the Director of Client Services. For those of you that have been clients since the early Nineties, you will remember Ann as she worked with us for much of that decade before moving up the corporate ladder. Ann has rejoined us to spearhead our client services efforts. She will be responsible for overseeing all inbound and outbound services for existing clients of the firm. In the next few months, she will be rolling out several new initiatives in this area. We know that you will enjoy working with her, and please do not hesitate to let her know if you have any requests or suggestions. Also joining the team is Kristen Ruth. Kristen is a Client Services Coordinator and will be assisting Ann in the client services area. She will also bring substantial technical skills to the organization.

As always, we thank you for your continued support of our firm. We are very excited about the opportunities in the marketplace and look forward to seeing each of you very soon. Please don’t hesitate to let us know if there is anything we can do for you.

All of our very best to you and your family.