With the looming issues of potential European sovereign debt defaults, of potential U.S. economic stagflation, and of the U.S. debt ceiling approaching deadline potentially limiting U.S. government spending, equity investors spent most of the second quarter on the sidelines. Equity trading volume was lighter than normal during the quarter indicating a malaise by stock buyers and sellers. As a result, stock prices declined almost -6% from the third week of February through mid-June 2011. However, thanks to a healthy stock price rally the last two weeks of June, common stock prices were virtually flat by the end of the 2nd Quarter providing investors with no meaningful changes since March 31st. The 2nd Quarter’s performance leaves the U.S. equity markets up approximately 6%, while the bond market experienced a gain of approximately 3%, year to date 2011 through June 30th.

So, what are our thoughts regarding the issues that had investors on the sidelines for most the second quarter 2011?

It was déjà vu all over again regarding European debt crisis roiling investment markets in the 2nd Quarter. In 2010’s 2nd Quarter, Greece, Italy, Ireland, and Portugal were in the news headlines with looming financial crisis hinting at likely debt payment defaults. Coupled with the Macondo oil spill in the Gulf of Mexico at the same time, the U.S. equity markets embarked on a correction that resulted in a -12% temporary correction in stock prices a year ago. Therefore, as the Greek financial crisis came to the forefront again this year, it is no surprise that the markets had already discounted much of the Greek financial damage into stock prices. As a result, Greek 2011 financial misery’s impact on U.S. equity markets was much milder than its 2010’s impact.

A common misunderstanding exists regarding the impact from Greece’s problems, inasmuch as the Greek bailout was not about aiding a Greek government that has been in default for much of its debt-issuing existence, but was, once again, about a bailout of banks around the world that have exposure to Greek debt. The most misleading message to worldwide investors from the IMF’s bailout is that all government debt is ‘safe’. The implications of this misleading signal are ugly! Is it / should it be true beyond any doubt that fiscally incontinent governments will always be able to raise more debt? Will it always be possible for governments to raise debt from other governmental entities if they ever experience revenue shortfalls necessary to meet unbridled government spending? If the answer is yes, this means the very government spending that screams capital destruction will continue without endpoint, often in support of other strapped governments that will have no incentive to fix their finances. More importantly, these governments would be competing for the same capital that would otherwise be deployed as an engine for economic growth in the private sector. The potential economic harm should be obvious.

Economies struggle to advance without allowing failures to recalibrate capital investors’ reward vs. risk scale. If the fear of shorter-term economic pain means our leaders are unwilling to let Greece, a small, economically irrelevant country, fail, we are then likely to face many more years of economic pains as we postpone the inevitable, necessary accountability of reckless financial management behavior by governmental officials.

However, for now, the worries of Greece are temporarily behind us. Who’s next??

Stagflation is a condition of slow economic growth and relatively high unemployment accompanied by a rise in prices, or inflation. Stagflation occurs when the economy isn’t growing but prices are; which is not a good situation for any country! During the 1970s, when world oil prices rose dramatically, fueling sharp inflation in developed countries, stagflation was rampant and provided additional catalyst for increased inflation. Are there reasons to be worried about U.S. stagflation in 2011 or 2012? 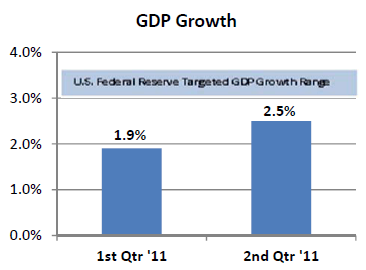 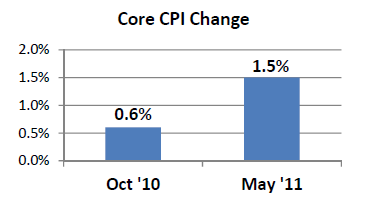 The unemployment rate stubbornly remains at high levels in spite of governmental stimulus programs focused on improving job growth or creation. The Fed now expects the U.S. unemployment rate to be 8.6% – 8.9% for 2011, higher than the 8.4% – 8.7% prediction earlier in the year. 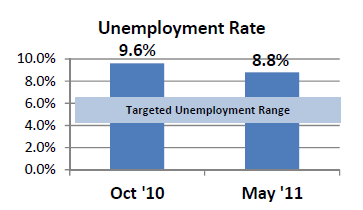 So, economic growth is sluggish and below Federal Reserve targeted levels, inflation has begun to gain momentum in recent months, and the unemployment rate remains stubbornly high. As importantly, all recent estimate revisions have been ‘negative’ revisions for these indicators. Therefore, investors do indeed have cause for concern regarding the possibility of stagflation. For those reasons, we are ardently monitoring the possibility of stagflation for the U.S. economy in coming years.

Various economic scaremongers have warned that Congress’ failure to increase the U.S. debt ceiling would lead to a ‘catastrophic economic impact’. The likely results of a U.S. debt default would include higher interest rates especially on U.S. government debt issues.

More to the point, it is hard to fathom that the U.S. Treasury would indeed ‘default’ on its debt payments, but would instead avoid ‘default’ by paying the interest due on the U.S. obligations and, thereby, force the U.S. Congress to ‘make do’ with the remaining funds. By doing so, the Treasury would leave Congress to make “tough choices” about spending the remaining available funds from current revenue collections; an apparent historically distasteful process for our Congressional leaders!

Said differently, the presumed default catastrophe driven by the inability to increase the debt limit is precisely why we believe the limit should not be increased. If it is fair to say that a failure by the Treasury to make debt payments would shake the global economy, it should also be fair to say that the U.S. will never reach that point; it will not happen. Instead, the better option of shrinking and limiting Federal government spending is the much more likely and palatable move. While some political compromise encompassing both spending cuts and a debt ceiling increase is quite possible, we believe the scaremongering regarding the impact of possible debt payment ‘defaults’ is more political posturing and rhetoric than truly expected reality. We do not anticipate a U.S. debt payment default in the foreseeable future.

While investors always have a myriad of concerns about which to worry (such as the issues mentioned above) and 2011 – 2012 is no exception in that regard, we are nonetheless moderately optimistic regarding the second half of 2011. Some key economic factors helping shape our outlook include:

Currently, common stock prices appear to be fairly valued. When we accept the current price of the market index and then solve the financial valuation equation for the variable of ‘sales growth’, we can estimate the embedded assumptions investors have regarding future sales growth necessary to support current prices or valuations. Recent calculations indicated that the S&P 500 at current valuation levels has an implied annual sales growth rate over the next five years of 9.7%. When comparing the 7.3% five-year historical annual sales growth rate for the stock index, the current valuation level appears to be ‘fair’ to ‘slightly expensive’. Of course, our job for our clients is to find individual stocks that have low embedded expectations for the company’s results while our expectations of such results meaningfully exceed the overall market’s estimates of the same. Nonetheless all things remaining the same, meaningful overall stock market appreciation will likely be dependent upon the S&P 500 meeting and exceeding the currently embedded 9.7% annualized earnings growth rate in the coming quarters and years.

However, we have already published our concerns regarding the probability of higher interest rates in the future. In fact, much has been written and otherwise communicated about our defensive posturing in bond and other fixed income portfolios to prepare our clients’ accounts for this anticipated increase in interest rates. Therefore, we are not anticipating that ‘all things will remain the same’. Higher interest rates lead to lower earnings multiples on common stocks; it is a mathematical realism. The proverbial ‘tug of war’ between corporate earnings increases on one side and changes in interest rates on the other side will dictate the ultimate outcome for stock investors.

All said, we anticipate that the S&P 500 could rally in the second half of the year, if the market resumes its’ focus on corporate earnings and those earnings meet expectations. As we said many times, ultimately the market will be driven by jobs and corporate earnings. If earnings disappoint and/or the jobs picture becomes much cloudier, the trading range that has existed since February may resume.

Again, we appreciate the confidence that you continue to demonstrate in our firm, our people and our professional services! Please let us know if there is anything that we can do to assist you when / if your financial landscape changes or with understanding our current investment outlook and strategies, especially as those strategies are reflected in your investment portfolios.