It seems like just yesterday we were welcoming the year 2000? It is hard to believe that we just celebrated the start of 2015! How time flies, and it has been an interesting ride, to put it mildly.

Stock and bond markets around the world finished 2014 with a rally, and most major market indices ended the year with respectable returns. Bond yields reversed from their 2013 move higher, and this year the 10-year U.S. Treasury yield declined from 3.00% to 2.25%, and continued its decline in January to trade below 2.00%. The U.S. Dollar experienced one of the largest one year gains on record as economies around the world showed signs of slowing down. This lead to dramatic drops in yields causing long-term interest rates in a large percentage of developed countries to drop below 1%. Short-term rates in several countries have actually declined below 0%, resulting in negative interest rates. It is hard to imagine paying someone else IF they will agree to borrow money from us. Yet, that is exactly what is happening in Europe today. Therefore, as difficult as it is to fathom, yields in the U.S. are actually some of the highest in the world which attracts money flows and leads to a stronger U.S. Dollar.

Oil and Politics – What a Recipe

In our opinion, the two biggest stories from the fourth quarter were the dramatic shift in power in Washington D.C. caused by the November elections and the massive decline in energy prices. The election results have the potential to significantly impact the investing landscape over the next two years, but they could also become a non-event. The next few months are going to be interesting to watch as we see how the President will respond to a new Congress that is under the control of the opposite party. Partisan politics aside, the impact of that decision cannot be overstated. If Congress and the President can agree on some important legislation, that both sides of the aisle say they agree with, we could actually see meaningful reforms and progress. Stalemate is a very distinct possibility, though. While sometimes that is a good thing, our country needs to make material progress on some very important issues that impact the ability of U.S. companies to be competitive in the global marketplace. We will watch the progress in D.C. very carefully as we believe there are some very positive developments that would have a material impact on our outlook for asset prices.

Declining energy prices are undoubtedly one of the very best things that can happen for the U.S. consumer. Every person who owns a car has received a raise in the last six months from declining gasoline prices, and the vast majority of people are likely to spend that newfound cash flow. This is clearly a positive for the economy. That said, we are going to watch very carefully to see what the impact is on job growth. The energy industry has been the fastest creator of jobs since the end of the financial crisis. Unless energy prices reverse quickly, the energy sector will not only cease to be a job creator, it is likely to begin to add to the rate of layoffs. Which of these two forces will be stronger? Traditionally, falling prices at the pump were more of a positive, but there has to be job growth in order for the economy to continue to expand. We are very skeptical as to which industries will begin to aggressively add new jobs in order to fill the void that will be left by the energy sector.

Valuations in the U.S. continue to be very rich, in our opinion, and we are concerned about the risk levels in the market. We have talked about this for several quarters, and we are very thankful that the markets have continued to press higher. There are several cases we support that indicate stock prices could continue to rally from here, and we inherently hope they do, but we cannot ignore the absolute statistics that give us pause. In order to help our readers see what metrics we watch, and why they concern us, we are going to take the approach that a picture is better than a thousand words. 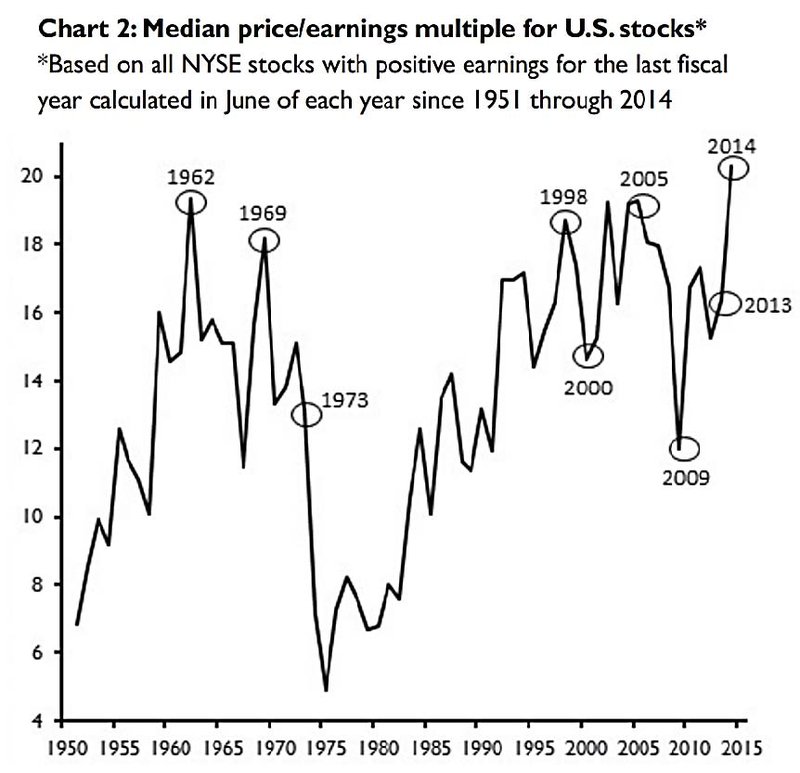 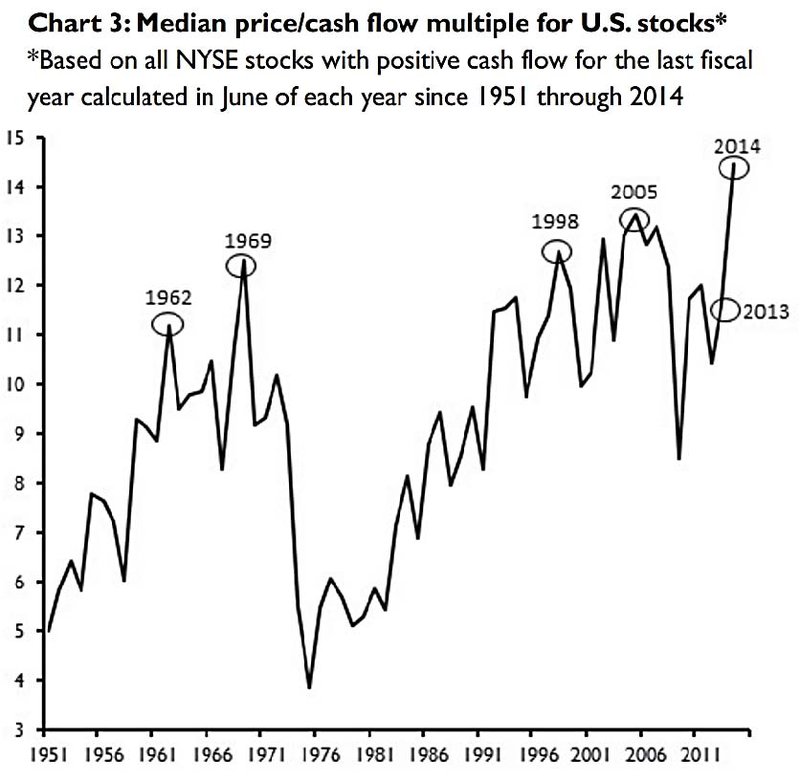 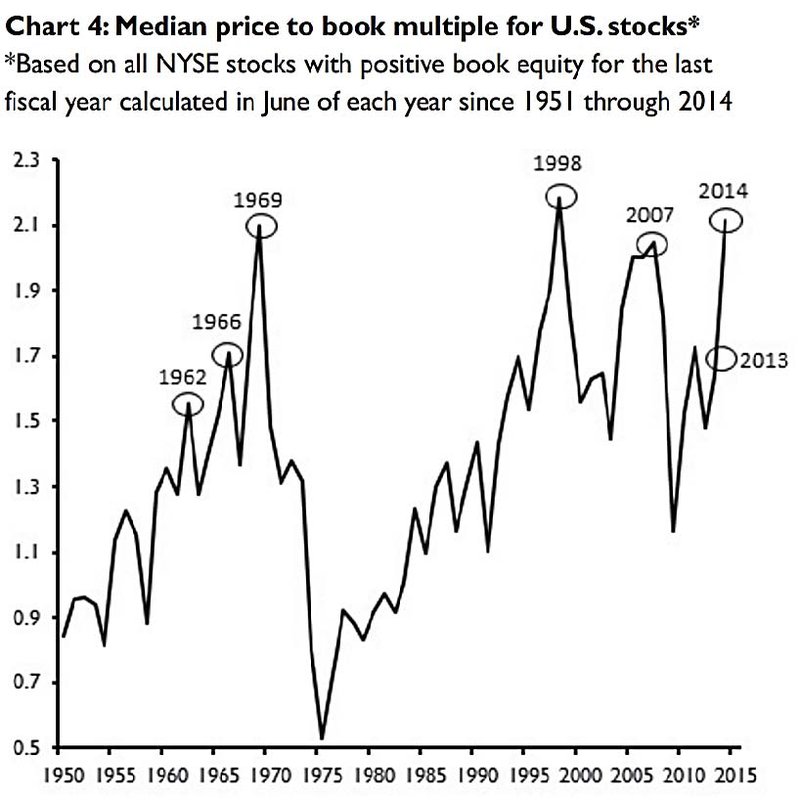 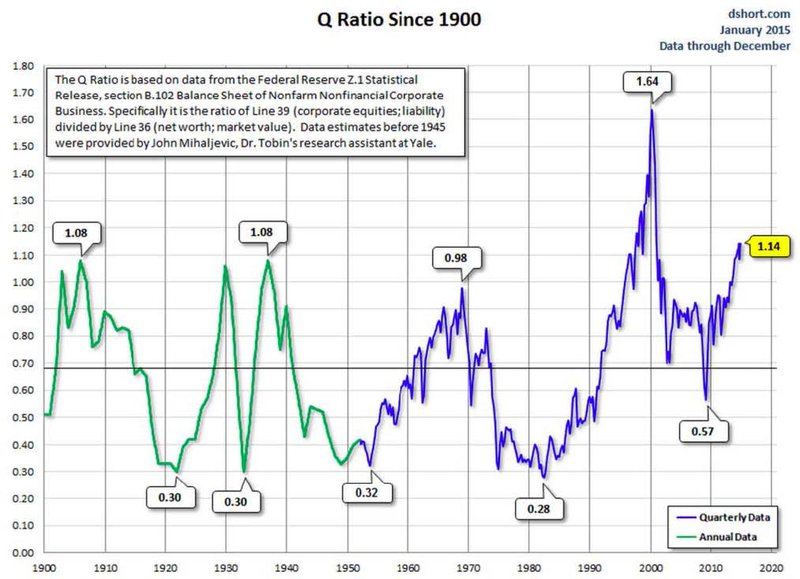 In the charts above you will see that Price/Earnings, Price/Book Value & Price/Cash Flow multiples, compared to their historical measures, are simply expensive no matter how one would like to rationalize their level. In addition, the Q Ratio, which measures market values of companies against their replacement values, is now higher than any other time since 1900, with the exception of the tech bubble. Does this mean stock prices cannot go higher? Of course not, and we could build a scenario where they will. We know that it is unwise, though, to ignore these signs, and it is why we continue to emphasize that investors need to reduce their correlation to traditional stock and bond markets. The risk/reward is simply skewed to the negative. It is for this reason that we continue to hold our rating at a “2” on the CAZ Scale. Our outlook improved substantially after the November elections, and it caused us to be more constructive. Today’s economic jigsaw puzzle is even more complex than usual, and predicting valuation expansion is a very risky proposition. So, we shy away from doing so. Therefore, we have focused our efforts on finding uncorrelated return streams. We continue to find opportunities that we believe will earn attractive rates of return without being subject to the overall trends of the market. This is why we continue to invest our personal capital in areas like Medical Royalties and Liquidations/Litigation Finance, as examples. We believe the returns available in these areas will be outstanding, without market correlation.

Our firm continued to grow in the 4th Quarter, and we welcomed two new members to our team: Debby Singleton and Joshua Blount. They are both strong additions to our Investment Operations group. Many of our clients will remember Debby from years past. Debby rejoins us after assisting in her family business for the last five years. We are very pleased to have both Debby and Josh.

As we start 2015 we have a many exciting things to look forward to. We hope that you find focus and fulfilment this year, and we thank you for the confidence that you have in us. We are proud to be a part of your lives, and we will strive to honor your dedication to us by performing to the very best of our ability. All our very best, and we hope to see you very soon.