The final weeks of the 4th quarter provided much excitement as the “Animal Spirits” returned and drove stock prices higher. As the shock of the election wore off, investors recognized that, while on the campaign trail, President Trump had made many promises that would likely be very favorable for stock prices. That resulted in a bit of a feeding frenzy in the market which became somewhat self-fulfilling. As investors saw prices rise, and people speculated about the possible improvement in economic growth, buyers became more emboldened. This continued through the end of the year, because it was clear that nothing could really derail that perception until a change occurred at The White House. Therefore, the “Trump Trade” became the focus, which was to buy sectors that would potentially benefit from what Mr. Trump had promised he would try to do. The Trump Trade is a great lesson in how market expectations matter, in some cases, more than the actual reality of economics, earnings and interest rates. The market is made up of psychological beings that do not always make decisions based on statistical facts, but instead make decisions based on the emotions of hope and fear.

Only time will tell if the Animal Spirits will be rewarded for their behavior and increased tolerance for risk. Clearly, the market has priced in a very significant improvement in the business environment and corporate profitability.

Now for the Hard Part

In order to justify the move that has been made by the markets many of the promises President Trump made need to become reality, and quickly. This is likely to prove much harder, and potentially take longer, than investors are currently expecting. We hope that many of the pro-growth initiatives, including tax and regulatory reform, are enacted and that we turn loose the powerful economic engine that has been running idle for several years. The debt levels of our country, and around the world, are at such extreme levels that the only way to pay it back is going to be via solid growth in economic output. The big question is will enough progress be made in Washington to secure the legislation that creates a business framework that makes this possible.

We expect President Trump to have significant support for many of his concepts, but we also expect that the “devil in the details” is likely to be a larger issue than many are giving credence for at this time. Those to the left of the aisle are going to oppose programs they are idealistically opposed to, while fiscal conservatives are going to be very concerned about actions that increase the deficit and the debt ceiling. That does not mean there are not viable solutions that can be achieved, it is just likely to take much longer than the markets are expecting. The longer it takes, the more impatient the markets will become. And the more impatient markets become, the higher the level of expectations will be on the current earnings picture, as well as expected final outcome of those negotiations. That is a recipe for volatility, and we expect market gyrations to increase signficantly as we move into the spring and summertime.

As a backdrop, we thought a couple of data points would be helpful. The first is a chart of the Wilshire 5000 (measures performance of all U.S. stocks with reliable price data) when measured as a percentage of Gross Domestic Product. This is commonly referred to as a proxy for the “Buffett Indicator” that Mr. Buffett has stated publicly that he uses as a common reference point for stock market valuations. The picture tells a thousand words, and it is simple to see that there have only been two times in modern history that we have been more expensive then we are today, earlier last year and during the tech bubble. 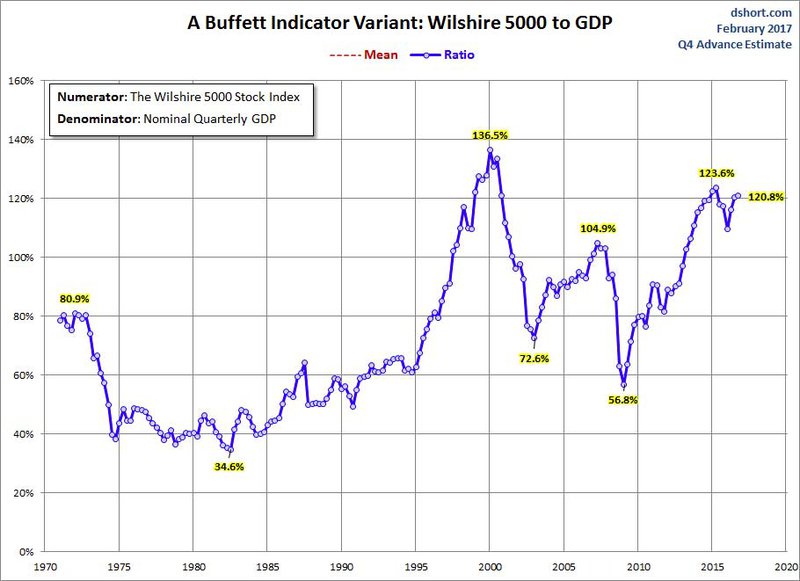 The second data point shows how stocks have historically performed from valuation levels similar to this. Ultimately, sophisticated investors know that most money is made based on where we buy an asset. Simply stated, one just cannot expect to make high rates of return on an asset, whether it be a house or a stock, if we pay a high price. The table below illustrates this simple concept. If the CAPE (Cyclically Adjusted Price-to-Earnings) ratio exceeds 25, market returns for the next 3, 5 and 10 years have been modest, at best. Today the CAPE is above 28…

Stocks are expensive, and providing less margin for error than nearly any time in history, and this is disconcerting. Therefore, we remain bearish with a “1” on the CAZ Scale. This is the most negative we have been since January of 2007. We are very concerned about the economy worldwide and specifically about a recession occurring over the next 3 years. As we have stated many times before, just because we are bearish does not mean we are predicting an immediate fall in the markets. We think the likelihood of a significant market correction is only a matter of time, though. No one can predict precisely when this will occur, or from what price level, and we certainly do not attempt to try. What we feel strongly about, though, is where investors should position their portfolio on the risk spectrum. Our scale is based on what we believe is the risk/reward for stocks, and right now it is just not attractive. We see at least 3x the downside likely when compared to the upside potential. As shown above, valuations are expensive and this means that stocks are unlikely to provide above average, or even acceptable, rates of return over the next 3 – 5 years. In our opinion that means that investors need to be more concerned about the downside in their portfolio as opposed to trying to squeeze the last few drops of blood from the turnip. That does not mean that investors should sell all of their stocks, but they should sell down to their sleeping level. If your allocation on the barbell has become much “fatter” in the middle, it is time to trim that excess fat, and move money to the sides.

For our personal capital, we would much prefer to own low correlation assets that should provide us with solid rates of return with much less concern about overall market direction. This is why the barbell approach exists, for such a time as this.

If you were not able to join us for the Themes for 2017 event, we missed you, and we hope you will be able to make it work in your calendar next year. We had an amazing evening with approximately 300 people in attendance. The event continues to grow in both scope and impact, and we are very proud to be able to offer our co-investors access to some of the best investment minds in the world. We are already in the planning stages for the Themes for 2018 event. Please save the date on your calendar for the evening of January 9th, 2018.

By way of recap, we wish we could have provided a more optimistic and enjoyable outlook for everyone, but both of our speakers had a very negative view of the landscape. They both articulated an assessment of world market conditions that is very cautious. In particular, they provided clear and compelling evidence of the dangers lurking in the credit markets around the world, with specific concerns in the high-yield/junk bond sector. The sheer volume of high-yield loans and bonds, combined with historically low credit spreads and absolute yields, is a recipe for a significant dislocation in credit markets when (not if…) the economy softens. History is clear that those who ignore risks and warning signs are impaled by the markets quickly when the tide begins to turn.

As a firm, we continue to seek out ways to profit from the dislocation of prices when it does occur, both on the short side and to purchase distressed assets. Our partnership with Paulson is an absolute must for you to investigate, if you have not already made your commitment. They are the team that we believe is best positioned to take advantage of the dislocation when it occurs. The structure of the vehicle is compelling and partner friendly as a result of our anchor investor status. Please take the time to learn more about the vehicle, as we will likely only have capacity for a few months.

All our very best,